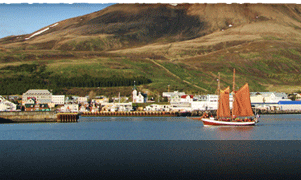 Húsavík has in recent years become increasingly popular as a destination for both foreign and native visitors. There are several reasons why visitors flock to Húsavík. It is the largest town and centre of commerce and services in Þingeyjarsýsla county of Northeast Iceland. It is a clean and tidy town in an attractive natural setting and offers all basic services in addition to a variety of recreational opportunities.
Local attractions

The town of Húsavík sits below Húsavíkurfjall mountain on the eastern shore of Skjálfandi bay. Just above the town is lake Botnsvatn, a popular place for outings. The lake is just the right size for a nice hike around it. The lakes surroundings are rich in vegetation and bird life and trout is said to be abundant, though small. No permit or fee is necessary so feel free to bring a fishing rod and try for a small trout.

A small stream runs from the lakes and down through part of the town. Alongside the river is a beautiful little park. Several trees have been planted there in past years and a nice walking path runs through it. At its lower side is a small dam with a bridge running across it and above it is a cosy little duck pond.
Húsavík harbour

Húsavík harbour lies below the bank right in the heart of town. The harbour once boasted a large fishing fleet, bustling with the activity of fishermen. It still serves as a fishing harbour but today’s activity revolves more around the successful whale watching businesses. The first organized whale watching excursions in Iceland started from here in 1995. Since then, whale watching has become a major attraction and Húsavík continues to be the leading destination for whale watching. In addition to the tours, a fascinating whale museum is located right by the harbour.

More about the whale watching

Up on the bank above the harbour runs the main street with a variety of shops and services. There, in town centre stands the church of Húsavík which many consider one of Iceland’s most beautiful churches. It was built with great ambition in 1907, then large enough to seat the entire congregation.

Up the street from the church, towards the mountain, you will find the Museum building in Húsavík which is well worth a visit. Within its walls you will find the regional folk museum, maritime museum, museum of natural history, district archives, photo and film archives and the library. Húsavík also hosts another unique museum, The Icelandic Phallological Museum which has roused the curiosity of people around the world.
Accommodation

Húsavík offers all necessary services to guests. In addition to shops and restaurants you will find a hotel and guesthouses. At the northern end of town is a nice campground with recently improved facilities. Beside the campgrounds are the sports fields and across the street from them is a nice swimming pool.

Up on the hill Húsavíkurhöfði at the northern end of town a test borehole was drilled several years ago in search of geothermal water. The water proved to have a unique mineral content and was led into an old cheese trough which was set up next to the borehole and has been used by locals for health baths with good results for years. Water from this borehole is now piped into the swimming pool.
Proximity to major attractions

In addition to the various recreational options in town, Húsavík is conveniently located for day trips to most of the major attractions in the Norhteast Iceland region. Driving south from town, Goðafoss is only a 30 minute drive and the Mývatn area about 45 minutes. Driving north around the Tjörnes peninsula Ásbyrgi in Vatnajökull National park is also about a 45 minute drive. One option is to take the Diamond Circle route, starting out from Húsavík heading to Mývatn area, then down to Dettifoss waterfall and Ásbyrgi and from there back to Húsavík. It is quite an extensive drive and the duration depends on the number of attractions visited along the way, but for those who are pressed for time, it can be fit into a long day.

Húsavík is the largest town in Þingeyjarsýsla, a prosperous community by the eastern side of Skjálfandi bay. It was here that the Swedish explorer Garðar Svavarsson spent the winter of 870. As Garðar departed Iceland the following spring, 3 people stayed behind; a man called Náttfari along with an unnamed serf and a bondmaid. Despite the sagas’ account of Náttfari’s settlement, first in Náttfaravík across the bay from Húsavík and then in Reykjadalur, history books usually credit Ingólfur Arnarson, who settled in Reykjavík four years later, as Iceland’s first settler.

Húsavík started forming as a village in late 19th century, and from the first, its main industries have been fisheries, the processing of agricultural products and trade.
Whale watching capital

In the recent years tourism has increased considerably with a large number of visitors every year. There are many good reasons why Húsvík is such a popular place to visit: an attractive and scenic natural environment, diverse recreation options, whale watching and proximity to the most highly regarded nature pearls of the region. Húsavík was the first town in Iceland to offer organized whale watching tours and has remained the whale watching capital of Iceland.

Húsavík is a clean and tidy town whose heart beats around the harbour with its remarkable whale museum. The church, built in 1907, stands beside the main street and is regarded as an emblem of the town. Up the street is the museum building with its collection of museums; a regional museum, district archives, museum of natural history, maritime museum and photograph and film archives.
Vacation destination

Húsavík provides the visitor with all the basic services and much more: hotel, guesthouses, shops, restaurants, a camping site, a botanical garden, museums, a swimming pool, a golf course and numerous pleasant walking routes. One of the most popular routes, is a walk around the lake Botnsvatn, just above the town, with the option of free angling.

The summit of Húsavíkurfjall mountain offers a panoramic view of the surroundings. On a clear day it is possible to see as far south as Vatnajökull glacier.
Reykjahverfi district

South of Húsavík is Reykjahverfi, where there is extensive greenhouse cultivation by means of geothermal heating as well as a swimming pool and a community centre. Its main geothermal source is at Hveravellir from where geothermal water is piped to Húsavík, providing central heating for all the buildings in the town.
Tjörnes peninsula

At the nearby Tjörnes peninsula, between Skjálfandi bay and Öxarfjörður are some of the most remarkable fossil layers in Iceland. These are sandstone layers which were formed at the end of the Tertiary period and during the Ice Age. The oldest fossil layers contain shell species which now live only in warm seas off the coasts of Western Europe. From these fossils it is possible to trace changes in climate, vegetation and marine life from the beginning of the Ice Age.
Mánárbakki farm is the location of a unique folk museum and a meteorological station where the Northern Lights (Aurora borealis) have been studied for years under the auspices of a Japanese research institute.